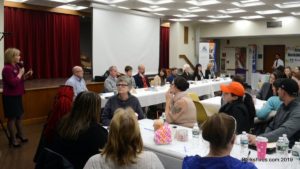 This was until 1995 when Oxycontin was released.

She said Berkshire County has the highest rate of addiction in the state and 6 percent of adults have opioid abuse disorder. She said this goes hand in hand with the high premature death rate.
The good news is that the county has come together to provide support.
“The connectedness that we all have I like to think that we are right-sized,” she said. “We all know each other we can’t hide and we don’t want to hide … we want to do the right thing.”
She said with the state-mandated medical treatment for opioid use in emergency rooms went a long way, but what furthered it was the linking up of different services in the county that help provide continued care.
She said there was still a need for more support especially recovery beds. In Pioneer Valley there is one bed for every 1,800 residents. In Berkshire County, this number is one bed for every 3,000 residents.
After the panel, breakout sessions were held allowing participants to brainstorm and address gaps and needs for their specific areas of discussion.
Each group later provided their key ideas and insights before closing for lunch.